How to get individual antenna calibrations?

Equipment accepted within the EPN

The GNSS equipment used at the EPN stations complies with the EUREF standards. This means that :

The usage of antenna radomes is discouraged, but not forbidden.

Antenna/radome calibrations used by the EPN 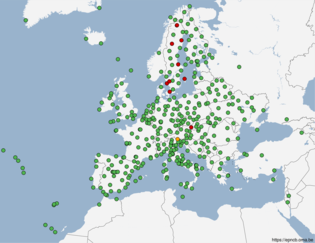 The long-term goal of EUREF is to eliminate the red and yellow dots from this map and to have a network with antenna+radome equipment which all have absolute ('individual' or 'type') calibrations freely available from the EPN Central Bureau. To achieve this goal, new antenna+radome pairs introduced in the EPN (new stations or replacements at existing stations) should, with some exceptions, be individually calibrated or have absolute calibrations available from the IGS. More details are available in "Procedure for Becoming an EPN Station" and "Guidelines for EPN Stations and Operational Centres".